With Songs for Animals, People and the Earth and his more recent animal rights songs, vegan singer-songwriter Daniel Redwood continues to write and sing songs for causes he believes in. Daniel explains, “Through these songs, I want to share my experience of the profound beauty, sensitivity, intelligence and friendliness of animals, especially the farm animals people use for food and clothing. I’ve created this music because I want to do everything I can to make this world a kinder, more compassionate home for animals.”

Daniel and his wife Beth became vegan in 2005 after spending time with Dr. Will Tuttle, author of The World Peace Diet, and seeing the film Peaceable Kingdom, which includes footage taken inside slaughterhouses and at sanctuaries where rescued animals are able to live their lives in peace and dignity. In what he describes as “my education in truth and compassion,” he and his wife, photographer Beth Lily Redwood, have since visited many sanctuaries including Animal Place (Grass Valley, CA), Farm Sanctuary (Orland, CA), Green Acres Farm Sanctuary (Silverton, OR), Out to Pasture Sanctuary (Estacada, OR), Peaceful Prairie Animal Sanctuary (Deer Trail, CO), Poplar Spring Animal Sanctuary (Poolesville, MD), Refarm Sanctuary (Washougal, OR), United Poultry Concerns (Machipongo, VA), and Wildwood Farm Sanctuary (Newberg, OR).

Daniel grew up in a musical family. His first guitar was a surprise present from his parents on his 15th birthday and he’s been playing and singing ever since. Within a few years, he began writing songs, inspired by Bob Dylan, Joan Baez, Pete Seeger and Peter, Paul and Mary. Songwriting has always been a way for him to speak from the heart and support movements for justice.

During his college years in Buffalo, Daniel sang and played guitar with the South Happiness Street Society Skiffle Band, which toured upper New York State and Southern Canada. He then moved to California, where he sang and wrote songs for the peace and farmworker movements. He worked as a volunteer with César Chávez and the United Farmworkers Union, and was sent by César on a coast-to-coast singing tour, performing at rallies, churches, synagogues, union halls, folk festivals, on radio and TV, and at house concerts in countless living rooms. Some of Daniel’s fondest memories from that era involve his singing to crowds before speeches by César, David Harris and other leaders of movements for justice and social change.

Daniel recorded a benefit record for the United Farmworkers Union, with original songs that combined English and Spanish. One of these songs, La Lucha Continuará (The Struggle Goes On) was recorded by Spanish-speaking singers the United States and Chile, and was later selected by the Smithsonian Institution for inclusion in its Grammy-nominated 5-CD collection, The Best of Broadside: Anthems of the American Underground, alongside songs by Dylan, Seeger, Phil Ochs, Tom Paxton and other leading lights of the folk revival.

In the 2018 documentary film, Cesar: Respect for All, Daniel sings We Shall Overcome in English and Spanish in the room where he sang it for (and with) César Chávez and farmworker activists many years earlier, at what was then the United Farmworkers Union headquarters and is now part of the César Chávez National Monument. The film follows young vegan activist Genesis Butler, César's great-grandniece, as she retraces his journey, finding deep inspiration along the way. 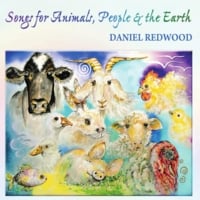